The scholars of Ahl al-Sunnah wa al-Athar In Yemen have provided one of the best works in refutation of the Qubooris such as the Zaydis, Twelvers, and Sufis (all three are united in the heresy of building lavish structures over graves and venerating the buried saints).

END_OF_DOCUMENT_TOKEN_TO_BE_REPLACED

Over the years I’ve received many messages from ex-Shias i.e. converts from Imamism to Islam/Ahlul-Sunnah and pro-Shia-Sunni unity (gullible) Sunnis alike.

I can still remember the case of a Palestinian brother. He used to curse me on a daily basis, the number of messages where I was called a ‘Wahhabi, Nasibi, Zionist’ etc. reached a level where I stopped trying to explain myself. Subtitling clips for various channels and writing articles for various platforms was my focus in the da’wah. All in defense of Ahlul-Sunnah and in refutation of Rafidism.

One day, that very brother sent me a long Email, apologising for all the insults and cursing and how after he studied my work, the websites I contributed to, etc. he finally realised that Imamism is nothing but falsehood masquerading as the school of Ahlul-Bayt.

END_OF_DOCUMENT_TOKEN_TO_BE_REPLACED

In the name of Allah,

I was born in Iran, in the Persian town of Shemiran, in the mid-80s into a Shia family (father’s side traditionally conservative and religious, well, at least once upon a time, mother’s side less religious, since like forever). My father and mother’s side of my family claims Arab ancestry, my grandfather was very proud of that and always emphasised on our (alleged) ancestry. Arab tribes did indeed settle all over Iran after the Islamic conquest, there is no doubt about that, however, I’ve always been very sceptic about Hashimite ancestry claims, and thus have always introduce myself as a Muslims who was born into an Iranian Persian Shia family first and foremost. Anyways, I mention this because I am from the Abbasi family (Abbasi is my actual surname). 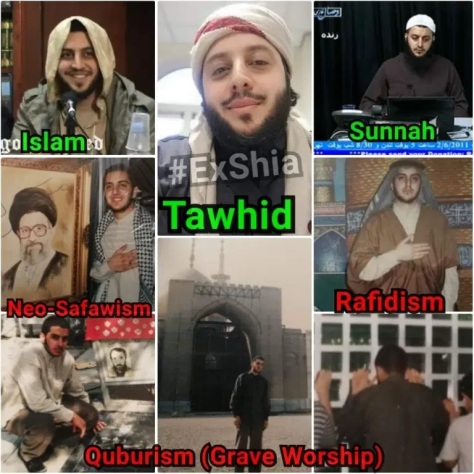 END_OF_DOCUMENT_TOKEN_TO_BE_REPLACED

I was invited on the TV channel (الأئمة) of the legend Mohammad Saber (Egypt) who interviewed me about my story (from Shi’ism to Islam/Sunnah).

Honestly, I’ve never spoken a full hour (in one session) in Arabic to anybody, not even to my wife (native Arabic speaker), let alone to an Egyptian (fast pace speaker). It’s not easy but possible and fun. You learn from your mistakes (which I definitely made a lot), and what is important is the Da’wah.

Mainstream Twelver Shi’ism is undoubtedly a sect of brazen and hideous Kufr and Shirk and Zandaqah. However, it is wrong to make blanket statements such as ‘all Shia are Kuffar’.

END_OF_DOCUMENT_TOKEN_TO_BE_REPLACED 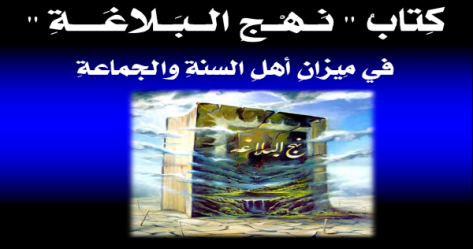 Nahj al-Balagha (Arabic: نهج البلاغة) (the Peak of Eloquence) is a collection of sayings and writings attributed to ‘Ali ibn Abi Talib (رضي الله عنه). It is a highly revered Twelver Shia book often referred to by Shia ‘Ayatollahs’ as the brother of the Qur’an (then they have the audacity to claim that Sunnis exaggerate with Sahih Bukhari who nobody dares to compare to the Qur’an).

END_OF_DOCUMENT_TOKEN_TO_BE_REPLACED

What is the actual truth regarding the Zaydi (Zaydiyyah) Shia sect? How true is their claim to the Ahlul-Bayt (عليهم السلام) where they (like every Shia sect) claim to be their exclusive true followers (and everybody else is misguided)?

END_OF_DOCUMENT_TOKEN_TO_BE_REPLACED

Here a recording where I interviewed a good old friend of mine who is none other than the grandson of Ex-Shia Grand Ayatollah Abul-Fadhl Borqei (may Allah have mercy upon him). This is an exclusive interview for the first time in the English language about his (brother Mohsin, the grandson) grandfather’s fascinating life and how he left Twelver Shiism, started refuting it and his own previous Shia works, as well as translating Ibn Taymiyyah’s devastating refutation of Twelver Shiism- Minhaj as-Sunnah to Farsi, his harassment by the Iranian regime and much more. Don’t miss it!

END_OF_DOCUMENT_TOKEN_TO_BE_REPLACED

That’s a fact and not up to debate. Yes, every Muslim nation has its rotten fruits/ apostates, however, the champion (when it comes to apostasy and anti-Islam sentiments) is undoubtly ̶t̶h̶e̶ ̶I̶s̶l̶a̶m̶i̶c̶ ̶R̶e̶p̶u̶b̶l̶i̶c̶ ̶o̶f̶ Shia Iran. Three Ex-Muslim councils in three major European countries alone are founded by Shia born Iranian.

END_OF_DOCUMENT_TOKEN_TO_BE_REPLACED

A quick glance at one of the mainstream books of Du’a (Abu Lahab+Abu Jahl type of Shirk on steroids) of the Twelvers in Arabic language by myself. 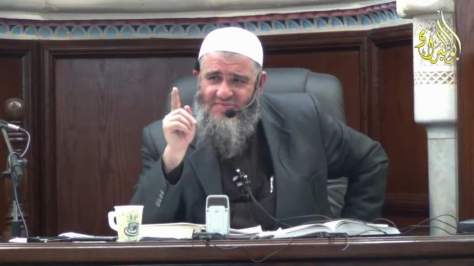 END_OF_DOCUMENT_TOKEN_TO_BE_REPLACED

I’ve read so many lies about myself, my deranged haters and opponents make up a new claim every second day. One day they say that I’m an Ahwazi Arab from Iran pretending to be born in Tehran, another day they say that I’m actually a born Sunni Iranian Baluch from Zahedan, a ‘fake Ex-Shia’ (if these deluded Asian and Arab Shia zealots would realise how many Shias have become Sunni in Iran, especially in Ahwaz they would literally get an heart attack).

Truth is, in the past I was never fond on telling my conversion story, I couldn’t really bother, writing against Ahlul-Bid’ah had always priority, who cares about me anyway, I’ve got more important things to do I always told myself.

If it wasn’t for teachers and then friends like Muhammad Hijab most of you wouldn’t have even seen my conversion story in HD. Anyway, same goes for tons of other stuff I haven’t revealed.

Fact is, I used to be Twelver Shi’ite and by the blessing of Allah and with the help of an Ex-Shia cleric I accepted Islam and Sunnah and Inshaallah I will die as a believer who relentlessly wrote in defense of Ahlus-Sunnah.

I was just on the phone with Ayatullah Abul-Fadhl Borqei’s (rh) grandson. He’s a friend of mine for over a decade now. We’ve discussed about him making an interview, talking about his grandfather Borqei, clarifying many misconceptions especially lies that the sour Neo-Safawi Khomeinists and other Rafidis spread about this man. 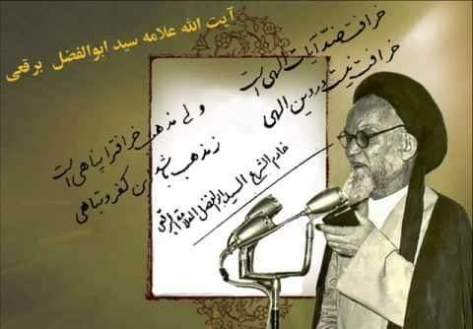