END_OF_DOCUMENT_TOKEN_TO_BE_REPLACED

Typically, flogging is imposed on an unwilling subject as a punishment; however, it can also be submitted willingly for sadomasochistic pleasure, or performed on oneself, in religious or sadomasochistic contexts. This article will deal with the link between self-flagellation in Shi’ism and Christianity, particularly in Catholic societies.

END_OF_DOCUMENT_TOKEN_TO_BE_REPLACED

In the name of Allah, all praise is due to Allah and may the Peace and Blessings of Allah be upon His final Messenger Muhammad al-Mustafa, his family and Companions, especially the Rightly Guided Caliphs, Abu Bakr al-Siddiq, ‘Umar al-Faruq, ‘Uthman Dhu al-Nurayn and ‘Ali ibn Abi Talib, Assadullah al-Ghalib. 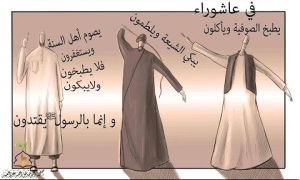 Sunni-Salafi scholars have always condemned extremism (tatarruf) and exaggeration (ghuluww) that heretical sects have perpetuated, innovated and propagated in the name of (or in opposition of) the Ahlul-Bayt, peace be upon them. By pondering over the statements presented in this treatise, the non-biased reader will clearly realise that Sunnis (Ahlus-Sunnah wa al-Jama’ah) are the middle path between two extremes; namely the extremism of Rafidism (Imamite Shi’ism) and that of Nasibism (the Nasibah or Nawasib i.e. those who embrace the hate of Ali (r) and his family as part of their faith).