A Facebook Sufi page with tens of thousands of followers responded to me after asking them a simple and straightforward question regarding the invocation of other than Allah in du’a i.e. literally beseeching and calling upon other than Allah (which is not tawassul in any shape or form, it’s pseudo-tawassul, a misuse of the term of tawassul). 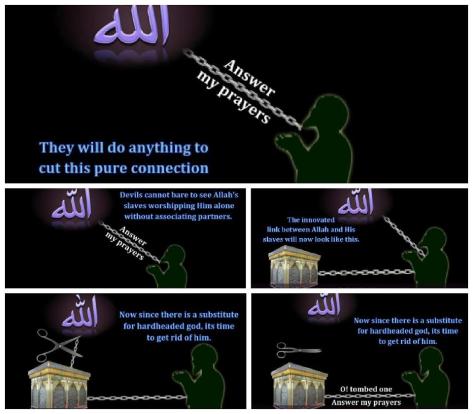 The answer I got was expected, but still, it is always shocking, just imagining that someone can claim Islam and Tawhid whilst holding the folding abhorrent pagan beliefs that resemble Catholicism more than they resemble Islam:

Mind you, that’s just one of their numerous social media accounts. Look how they shamelessly admitted that it’s fine to beseech (!) one’s favourite shaykh/saint at any place and time, even during times of hardship (where Allah has commanded us to call on Him alone). Of course, they are not alone, the biggest Sufi authorities of our time like the former puppet ‘mufti’ of the Egyptian regime, Ali Gomoa, shamelessly stated that it is totally fine for a Muslim (!) to beseech lady Mary (peace be upon her)!
And the examples are many, from their biggest scholars to their du’at, all of them sanctify the ghuluw of invoking the saints (which at best is based on flimsy and ahad narrations), some of them also openly state that you can invoke Jesus Christ (peace be upon him), opposing that makes you a ‘Wahhabi Najdi’, masha’allah!
Of course, the Rawafid (not just some non-representative layman or local cleric, but the likes of Ali Sistani, the most influential Shia ‘Ayatollah’ on this earth) have the exact similar belief, of course, they do, after all: ملة الكفر واحدة (the nation of Kufr is one nation). This is why the Rawafid (despite all their differences) always support them (like in Egypt) and parade them as ‘true Sunnis’ against the ‘Wahhabis’ (those who’ve committed the ‘crime’ to call upon Allah alone).

By the way: Shadaa’id (شدائد) are times of need and extreme hardship. Scholars like Shaykh Muhammad ibn Abdel-Wahhab said that the shirk of the modern-day grave worshippers (quburis) is worse than that of (some of the) polytheists mentioned in the Quran as the latter invoked (at least) none but Allah when faced with calamities.

A friend, a Shaykh, shared my screenshots and commented:

إِنْ يَدْعُونَ إِلَّا شَيْطَانًا مَرِيدًا 0 لَعَنَهُ اللَّهُ وَقَالَ لَأَتَّخِذَنَّ مِنْ عِبَادِكَ نَصِيبًا مَفْرُوضًا
In fact, they (the Mushrikeen) invoke none but the rebellious Satan, cursed by Allah, who said, I will surely take from your slaves a certain number (with me to Hell).
[4:117-118 – Slightly paraphrased]