Yes, sometimes falsehood does deserve mocking, however, mocking alone will bring no good, at the very least it must be accompanied by knowledge.

The Rafidi practice of praying on the dirt/soil of the grave (!) of al-Husayn (r) in Karbala is nothing but a ugly Bid’ah that was concocted by extremists in the name of the Ahlul-Bayt that has been academically refuted for the falsehood that it is.

Mocking alone and or desecrating Shia prayer clay tablets/rocks will neither educate Sunnis and Shias nor being any other benefit, in fact it will push Shias further away from the truth make them drown more in the misguidance that is Rafidism.

Most Shia (and Sunnis) laypeople have never studied this matter in depth, Shia laymen in particular are notorious for copy pasting and parroting what their deceptive clerics and speakers have fed them with. Nothing but distortions as we shall see. 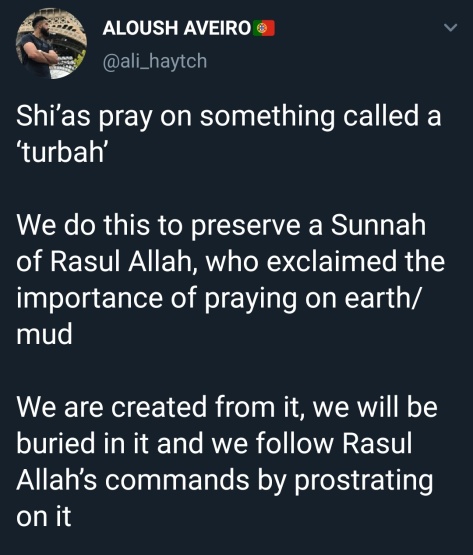 Originally prayer upon soil or upon earth, is permissible by consensus. And the Prophet (s) said the earth has been made for him and his Ummah as a masjid and pure. In the narration of Sahih Muslim, we read, “And its soil is made pure, so whenever the time of prayer comes for anyone of you, he should pray wherever he is”.

Twelver Rafidi narrations (attributed to the Ahlul-Bayt) say it is a must to prostrate only on soil/earth or that which comes out from earth.

The truth is: First of all, during prostration, a person is obliged to prostrate upon SEVEN bones (parts) of his body. Narrated Ibn `Abbas: The Prophet said, “I have been ordered to prostrate on SEVEN bones i.e. on the forehead along with the tip of the nose and the Prophet pointed towards his nose, both hands, both knees and the toes of both feet…” [Bukhari]

Imam Baqir said: “One must not prostrate on anything that is not touched by his entire body during prostration.”[Al-Istibsar].

Now here is what over zealous Shia propagandists fail to realise:

The Shia prostration is not a complete one. They do NOT pray on soil with all their bones, at best it’s their foreheads that touch the soil (clay tablets).

So when Shias misquote ahadith of how the Prophet (s) prayed on soil (as if other than soil is impermissible!), we say: You can’t pick and choose. Your hands (palms), knees and feet must also touch the soil. So either remove the carpets entirely from your ‘mosques’ or put a clay tablet under your ✋, knees etc. be careful though, the later will require some good balancing.

So prayer upon soil without any doubt is correct and acceptable and recommended acc. to some scholars, but neither the Messenger of Allah (s), nor his household or companions made ever the extremist Shia claim that prostration on other that what comes from soil is impermissible.

Not even other Shia sects (like the more moderate Zaydis) agree with the extreme Twelver Shia position (that in itself is flawed and impractical as they themselves only touch the soil/clay with their foreheads, the rest of their limbs touch the carpet).

Direct prostration on soil/bare ground is ideal and arguably Sunnah, not on a carpet where a clay tablet is placed to touch the forehead only! This is nothing but an ugly innovation that the Prophet (s) never instructed, especially not in the form that the Shias practice it.

Now if only the Shia Twelver Imamite sect would have stopped here (i.e. at the alien and extreme claim that prostrating on soil/what comes from soil is compulsory) …instead they (as usual) have added to this Bid’ah, claiming that prostrating on the soil of the grave (!) of al-Husayn (r) is recommended! 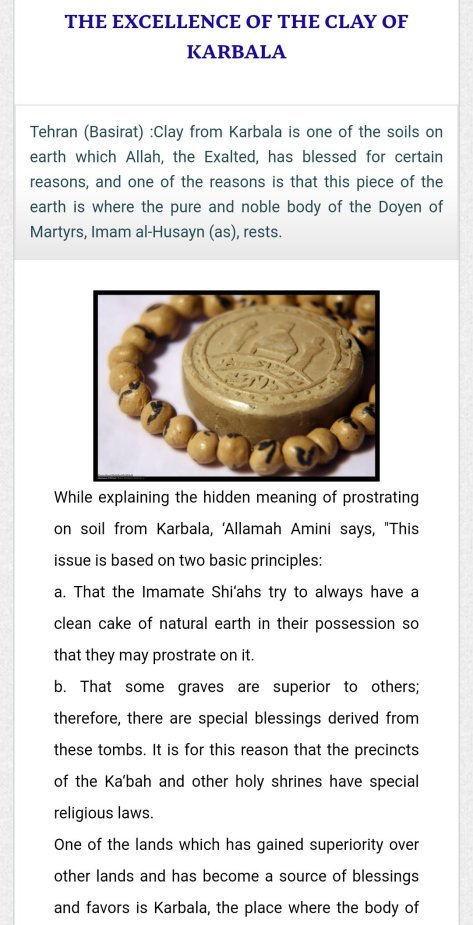 Yes, you heard right! Their Ghuluw (extremism) isn’t even revolving around the Messenger of Allah (s) and his grave but with his grandson’s!

Never can they prove this ugly Bid’ah, as the Prophet (s) never prayed nor taught others to pray on a specific soil (let alone from Karbala, over 50 years after the Prophet’s demise!), this is a later Bid’ah introduced by the Ghulat (extremists) in the name of the Ahlul-Bayt.

The Shias should contemplate that had it been that this soil of Karbala was so virtues, then how could Allah deprive the Ummah before the martyrdom of al-Husayn (r), starting with the Messenger (s) himself using this sacred and virtues soil for prostration?

As for the faulty analogies of the Shias like when they quote some authentic narrations of how the soil of Karbala was brought to the Prophet (s) with the news that his grandson will be slaughtered in the future:

Firstly, the Messenger of Allah (s) crying over the news (at that moment i.e. he didn’t turn it into an annual Self-flagellation carnival with drums and what not) that his grandson will be killed and been given some soil (by Jibreel) of that land (Karbala) is no evidence for praying on that soil let alone tuning it into a ritual and claiming that it is the most superior of all soils! He (s) never did that and thus it’s a Bid’ah.

The Twelver Shias have went so far in their extremism with the soil of Karbala that they prostrate upon it, rub it on their bodies (and cheeks after Salah), and even eat it unde the pretext of seeking blessings from Imam Hussain!

These beliefs are without a shred of doubt absolute falsehood from every angle. They resemble the misguidance of the Christians and their veneretion of the Cross.

Ibn al-Qayyim says to the Christians:

‘So how do you honour the Cross when you say your lord was insulted on it?’

The case is very similar with Shias and their attitude with Karbala; al-Husayn (r), when he reached Karbala asked ‘what is this place’?

They said it is Karbala. He replied: it is a land of Karb and Bala (anguish and misfortune). And then he was killed on this land.

And now the Shias say that they honour this land! How can you honour a land and soil on which the beloved grandson of the Messenger of Allah (s) was deceived and then slaughtered?

By prostrating over clay tablet made in Karbala (tomb dirt), though Shias aren’t literally prostrating upon graves during their prayer, yet they are serving the same rationale/ basis for which prostration upon graves is prohibited.

And this is one of the ways by which Satan has misled the Shias. As a matter of fact, most Shia clay tablets today have invocations like ‘Ya Hussain, Ya Zahra’ (rarely Ya Muhammad) written on them! Others with pagan Jewish-Hindu-like hand symbols (‘hand of Abbas’) etc! 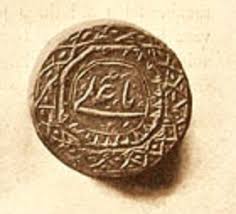 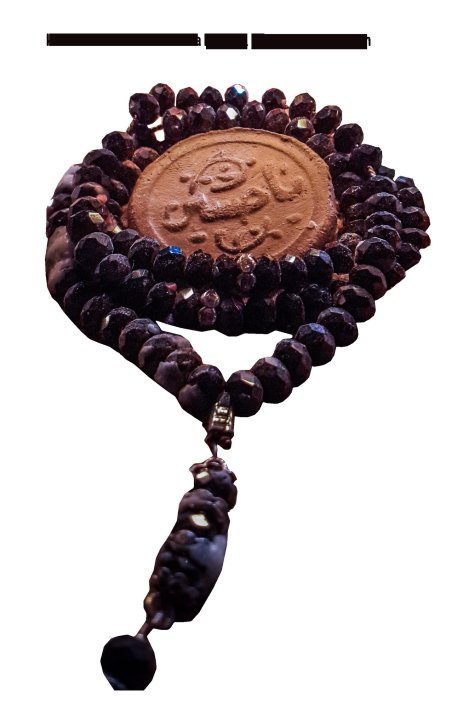 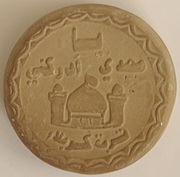 Imagine Sunnis prostrating on little hockey puck like clay stones on which shirk prayers like ‘Ya Omar, Aba Bakr, Ali, Fatimah, Aishah’ etc. is written on. Of course in that case Sunnis would be guilty of Bid’ah and Shirk too, however Sunnis haven’t innovated such nonsense. 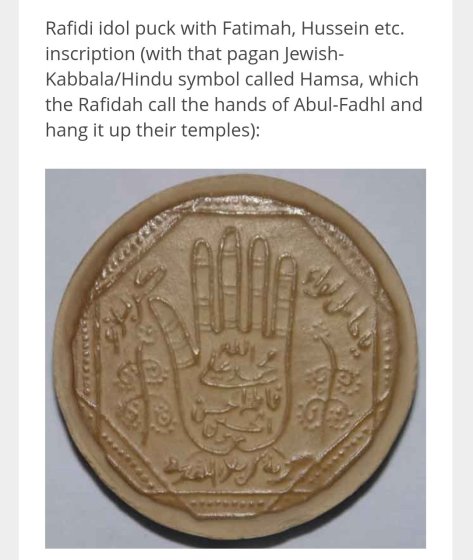 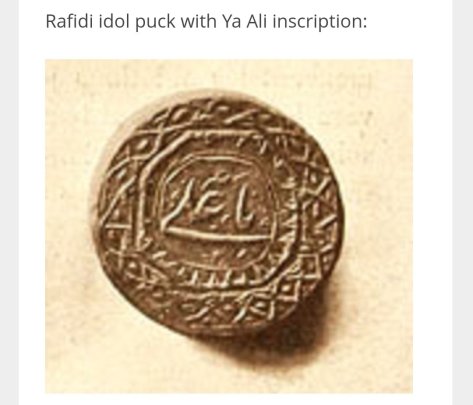 Yes, there are plain Turbahs and even some with Allah written on them as well, however, this is the definition of Shirk: associating partners with Allah not rejecting Allah completely.

I myself (#ExShia) used to throw around all those standard and shallow arguments that Shias (elite and laity) still employ in order to desperately justify the ugly Bid’ah of praying on Karbalaite clay tablets (Turbah), I hope this thread helps Ahlus-Sunnah and truthseeking Shias.

One of the most detailed articles (haven’t even seen better stuff in Arabic!) I’ve ever read on this issue is the following one by my brother and one of our top researchers @Noor_as_Sunnah, he didn’t leave a single Shia argument out. Enjoy:

PS: Bid’ah naturally breeds more Bid’ah. Here we have the Double Whopper Turbah, and Snooker with Turbah…and the Turbah Rak’ah counter…and and and… 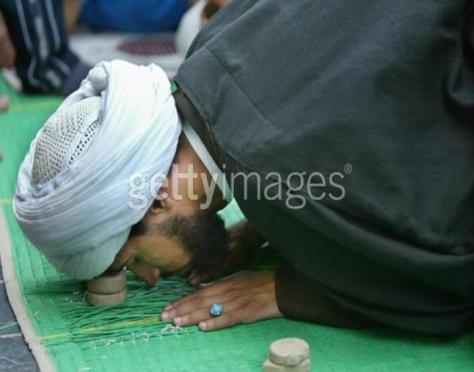 Look at the Jahl Murakkab…the Shias are not to blame, they follow their Batil sect, but these ignorant ‘Sunnis’…

The whole issue of prostration on a turbah (clay) is a great example of the deviancy of the Twelver sect. They simply MISUSE Sunni narrations. Take the following one for example:

I saw Allah’s Messenger (s) prostrating in mud and water and saw the mark of mud on his forehead.

You may pray in the mud.

You should not rub your head or body until you have finished prayer.

– U must always pray in the mud, or something from the mud or earth.

– Praying in the mud or earth is better than praying on anything else.

– Actually, praying on the earth from the grave of the Imam (not the Prophet!) is the best thing u can do!

See how deviant this interpretation is – compared with the straight forward understanding of Ahlul-Sunnah?

Now, they are not content with leaving it at this. They insist on excelling in deviancy. Look at the following fabrication that theybhave attributed to the Ahlul-Bayt:

Prostration on the clay from the GRAVE of al-Husayn radiates light to the seventh earth.” [Man la yahduruhul-faqih]

This is simply clear cut bid’a (innovation). When did the Prophet (s) ever mention this?

When did he ever even perform this action?

and what’s more – as above, they imprint these tablets with the names of their Imams, invoking them!

They have gone from simple Bid’ah to Shirk.

The Shia stand on a carpet, place a stone l clay tablet (Turbah) on it, touch their heads to it, and then state “we are praying on earth, why you Sunnis pray on carpet”.

It’s almost an act of self-mockery.

Shias indeed pray on carpets and rugs. Their mosques are all carpeted.

If they were serious about praying on the earth their mosques would all be filled with dirt/soil, not nice rugs.

As for rugs and carpets in general:

Leaves come from trees; cotton comes from trees. The Prophet (s) and his companions used to pray on their clothes sometimes (narrations Shias often deliberity don’t cite). Many carpets are made of cotton, cotton IS from the earth.

Note: Statements like ‘Shias pray to rocks’ are as ignorant as saying that Sunnis pray to the Ka’bah. Nonetheless, what the Shia do is still a Bid’ah, especially their claim that prostrating on the soil of Karbala being Sunnah!