One of the – if not the – most gullible and easiest targets for Rafidi propagandists from Iran and elsewhere are grave worshippers (Quburis) such as extreme Sufis (pseudo-Sufis really, as true Sufism is part of Islam).

As a former Twelver Shi’ite (Rafidite) I can testify that the vast majority of so-called ‘Ex-Sunnis’ I met in my Shia days (right up to this very day) were either complete ignoramuses or people of a Sufi-Quburi background. We were encouraged by our elders to focus on converting Sufis as they are closer to Shi’ism and agree with a lot of beliefs and rituals (like an excessive grave and saint veneration), unlike the ‘evil Wahhabis’ who ‘hate the Ahlul-Bayt’.

Of course, eventually, I found out that whenever a Rafidi refers to someone as a ‘true Sunni’ that person, in reality, is nothing but a semi-Rafidi, especially of the Quburi Sufi type. A famous statement that has been repeated by many scholars of Ahlul-Sunnah summarises what I’ve explained so far:

Sufism is the gateway to Shiism. 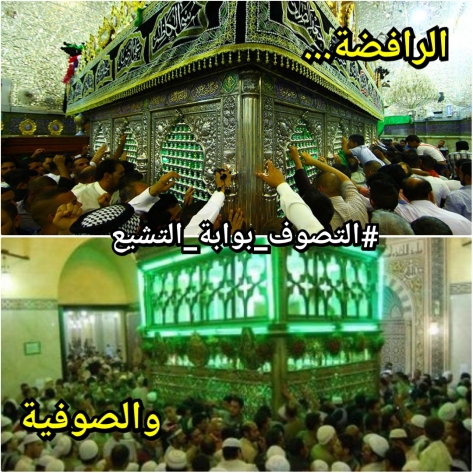 Books after books have been written by the scholars of Ahlul-Sunnah revealing the links between extreme esoteric (Batini/باطني) forms of Sufism and Shi’ism.

One just needs to study pagan rituals amongst subcontinent Batini extremist Sufis and the Rafidah to see how similar (despite all their differences of course) they are, primarily on matters like Quburism (grave-worship), Ghuluw (over-exaggeration) with the saints and other blatant harries that Islam came to annihilate and uproot from their roots.

But don’t the Rafidah have narrations in their books where Sufism and Sufism are scolded and rebuked? Yes, they do, however, it doesn’t contradict the fact that Rafidism agrees with Sufism on many heresies.

No matter how much Quburi and Rafidi Sufis differ (they certainly do), they are united in their Ghuluww regarding their buried and tombed saints/demigods, and thus it is not surprising that the Shia clergy parades the Sufis as ‘true Sunnis’ and that Rafidism grows and flourishes where folklore, Bida’, Khurafat, and Ghuluw (like grave-saint-Imam-Shaykh-Pir veneration) are rampant, like in many of not most Sufi communities. Rafidism naturally grows and prospers in such habitats.

The Link Between Shia and Sufi Grave Worship In Nigeria

A group of West African Sufi converts to Shi’ism. The gullible have disembarked the rotten Sufi Quburi arch only to embark on an even more heretical carrier, the sinking Rafidi ship of superstitions and Kufr, and Shirk in the name of the Ahlul-Bayt. Notice how their Iranian Qommite educated leader is holding a banner of Shirk (where of course other than Allah is invoked) where his new demigod is whitewashed (just like Christian missionaries depict Jesus Christ, peace be upon him), a Persianised idol with effeminate facial features whom they know invoke for all their needs instead of invoking their previous favourite saints/Shaykhs. 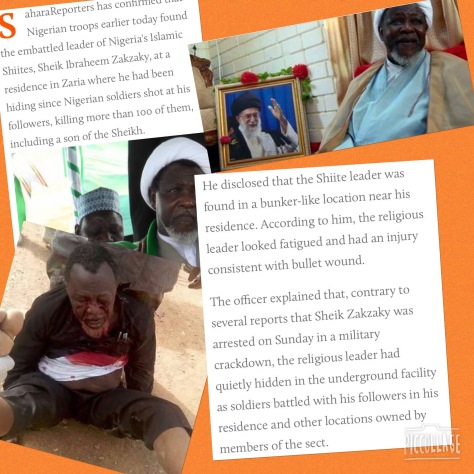 Zakzaky’s organisation included hundreds of paramilitary guards called Hurras who in blind obedience to him and Iran’s agenda pushed Khomeinism in Nigeria. Whitewashed and Persiaised idolatrous depictions of the Ahlul-Bayt and the Shia clergy were put up everywhere.

Tashayyu’ (Shi’ism) is nothing but a cause of heresy and destruction and misery.  May Allah protect the Muslims of Nigeria from the evil of it Iran.

Of course, the Iranian missionaries haven’t failed to indoctrinate the minds of the gullible with Catholic-Style Icon/Image veneration (of womanish looking Persian ‘Imams’), a Bid’ah unknown even in the most deviated parts of Islamic Nigeria (before the arrival of Shiism). 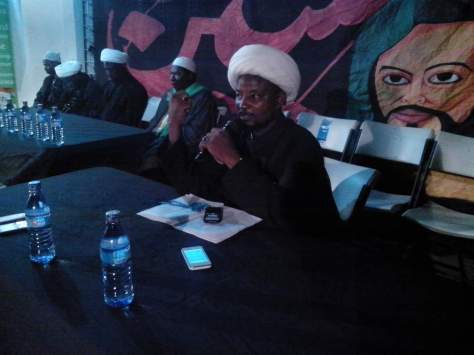 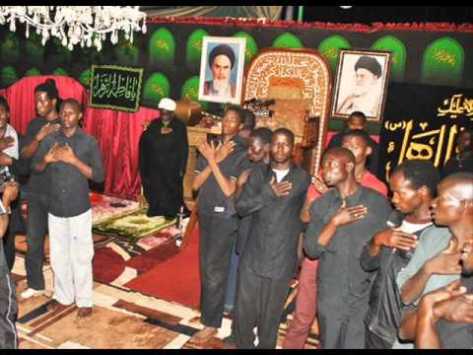 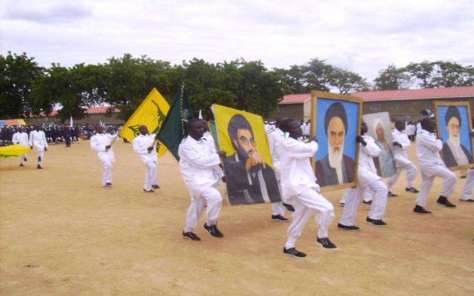 Iranian funded propaganda in Sunni Nigeria (Iran would never allow non-native Sunnis roaming their lands): DVDs of the likes of NakhJavani and Iranian Mullahs and their petrodollars taking advantage of poverty and ignorance, indoctrinating innocent children. 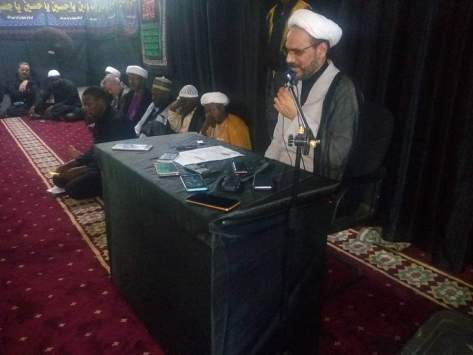 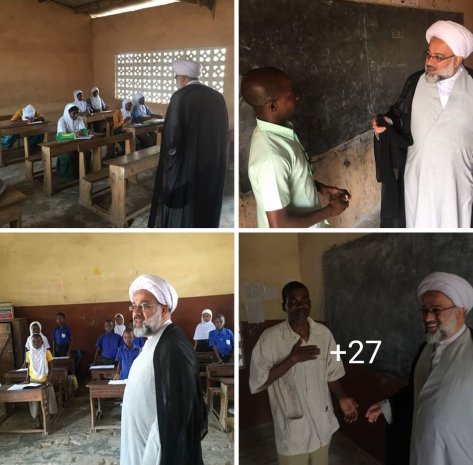 Iranian Neo-Safawi missionaries take full advantage of impoverished parts of Africa. Here you can see them teaching the gullible to seek blessings from pieces of cloth that were rubbed at shrines in Iran.

The gullible holding up idolatrous depiction of the Ahlul-Bayt depictions that are as whitewashed as the Jesus Christ that is promoted by Christian missionaries in Africa and elsewhere. A Persianised Ahlul-Bayt with a trademark of the followers of the Dajjal, the green shawl… 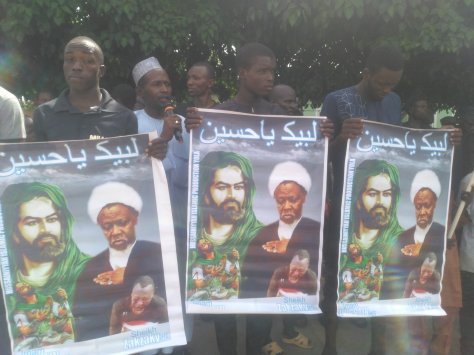 The Dajjal would be followed by seventy thousand Jews of Isfahan wearing Persian shawls. [Sahih Muslim] 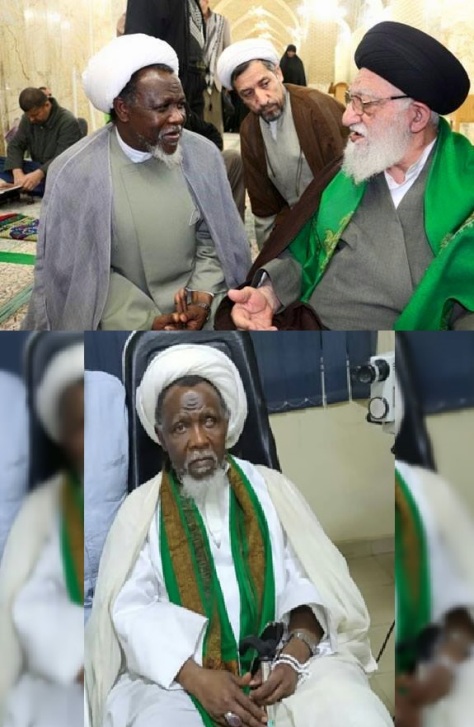 As mentioned earlier, Shi’ism flourishes and prospers where saint/grave veneration and worship, especially in the form of Sufism, is already rampant. Arab countries are no exception to the rule, in fact, they might be worse:

The Link Between Shia and Sufi Grave Worship In Egypt

There are a number of obscure shrines attributed to the Ahlul-Bayt in Egypt. Grave veneration and other bizarre rituals are as common in those places as they are in other strongholds of Shirk like in Karbala, Najaf, Qom, Mashad, etc. 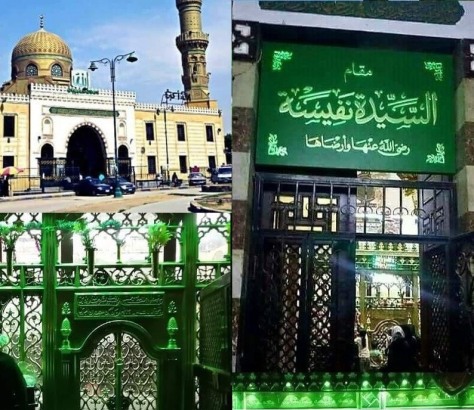 It is said that Sayyidah (lady) Nafisa was buried in her house. The extreme Sufis have turned her grave into a place of worship and erected a  large shrine and mausoleum above it which is also flocked by Sufis and Shi’ites from around the world. Her shrine has become an idol, a place of pilgrimage for people, especially on Sundays and Thursdays. It is also a custom to hold wedding ceremonies near there.

Each year on the birth anniversary of Sayyidah Nafisah and Lady Zaynab ceremonies are held in Egypt. Sufis and Shi’ites request blessings from their buried saint and perform Tawaf around the shrine, it has even become custom to let brides perform Tawaf. 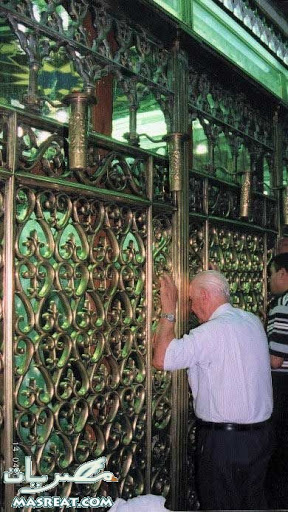 Imam Dhahabi said regarding these types of deviants who invoke the saints for help such as lady Nafisah:

And the ignoramuses amongst the Egyptians hold beliefs in regards to her which are beyond description, impermissible [beliefs] which include polytheism (i.e. Shirk). They prostrated (i.e. to her grave) and beg her to forgive their sins. These [heresies] were all plotted by the ‘Ubudiyyah [Siyar A’lam al-Nubala’ by Imam Dhahabi]

The close affinity between Sufism and Shi’ism led Ibn Khaldun to say that the later Sufis mixed with the Isma’ili Rafidi Shia (who were the first to introduce Mawlid of the Prophet and saints), and each group learned from the other. 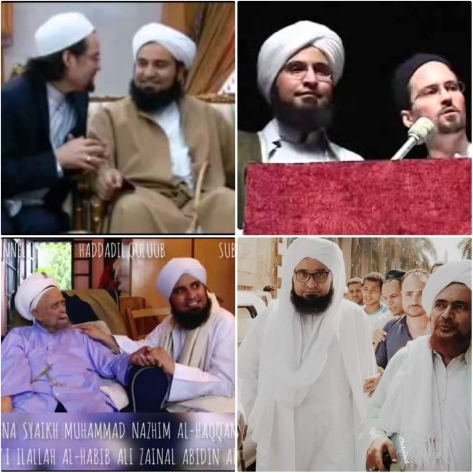 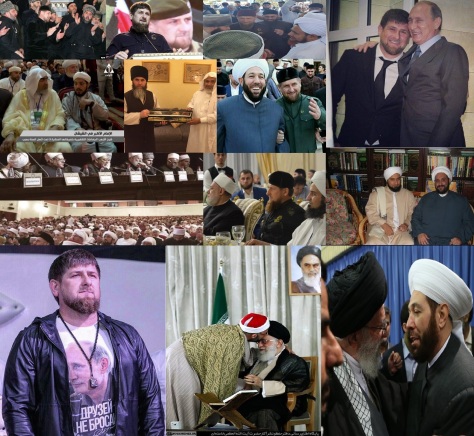 The grave of al-Husayn in Cairo

This is yet another (empty) grave turned into a place of worship frequented by Sufis and Shi’ites alike. It was built in 1154, and then later reconstructed in 1874. 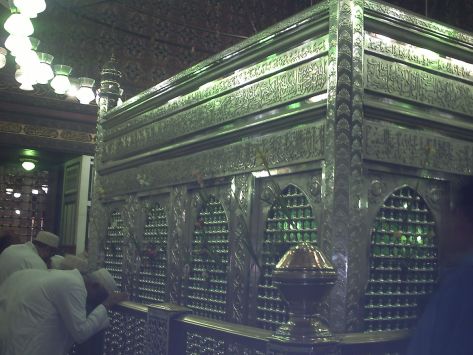 The Rafidites are of course the sect with the most extreme and absurd claims. The tomb and shrine-obsessed Persian Zindiq of Qom, Ibn Qulaway (student of al-Kulayni and teacher of al-Mufid), claimed that al-Husayn’s head was buried next to his father’s grave (in Najaf, Iraq).

Sufis of Damascus and Cairo also claimed al-Husayn’s head, each grave-worshipper has created his own pilgrimage in the name of the Ahlul-Bayt.

The idolatrous place of worship in the name of al-Husayn was actually built by an esoteric Isma’ili ruler. The grave was ‘rediscovered’ in 1091 at a time when Badr al-Jamali, the grand vizier under Caliph al-Mustansir, had just reconquered the region for the ‘Fatimid’ Caliphate. Upon the discovery, he ordered the construction of a new Friday mosque and mashhad (memorial shrine) on the site.

The current shrine was made by an Indian grave-worshippers. To mark the site of burial, known as Ra’s al-Husayn (Arabic: رَأس ٱلحُسَين‎) or Mashhad Ra’s al-Husayn, Taher Saifuddin had a shrine built in Mumbai, which was later installed at the mosque in 1965 just before his death. It was subsequently inaugurated by his son, Mohammed Burhanuddin. According to tradition. The shrine was originally meant for Abbas Mosque, in Karbala, Iraq but could not be installed there.

The location and the shrine had previously been measured precisely, but it simply didn’t fit. Taher Saifuddin, the maker of the shrine then claimed to have received ‘divine guidance’ by way of intuition that out of loyalty, he could not allow Ra’s (the head) al-Husayn to be without a shrine. As a consequence, Abbas’ shrine was flown to Cairo and installed at Ra’s al-Husayn at the Al-Hussein mosque, instead.

Iran is hell-bent to turn Cairo into yet another saint pilgrimage destination. Shrine business is after all big in Iran and Iraq and wherever the superstitious and grave worshipping Rafidis set foot.

Many neo-‘Ubaydis (‘Fatimids’) propagate Shi’ism under the cloak of Sufism in the Arab world and at the behest of Iran.

It is believed that numerous members of the Ahlul-Bayt have shrines in Egypt: Lady Zaynab, Ali Zayn al-Abidin (who is actually buried in Madinah), Fatimah al-Nabawiyyah, lady Sukaynah (Sitt Sekina), lady Ruqayyah and as mentioned earlier, lady Nafisah. A whole set of lady and male saints whom the Sufis cry out to, as to all the saints, for madad (help), blessings, and everything else a Muslim would only ask from Allah in his Du’a.

Related topic: Grave worshipping Sufis – The choice of every dictator and the Rafidah

When The Ahlul-Bayt Loving Sufis Said Labbayka Ya Modi & Putin!