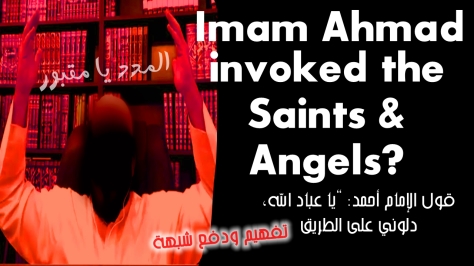 The hadith of calling for invisible helpers in the wilderness has several wordings and is often often misused by the grave worshippers (Quburis) in order to justify their shirk and ghuluw.

From the Tabi’i Aban b. Salih, from Mujahid, from Ibn ‘Abbas, from the Prophet (upon him blessings and peace):

Truly Allah has angels on earth, other than the recording angels, who write down whatever tree leaf falls. Therefore, when any of you gets injured in his leg in a deserted land let him call out: Help, servants of Allah!

Al-Bayhaqi in Shu’ab al-Iman narrate it as a saying of Ibn ‘Abbas with the variant wordings (in the manuscripts): “Servants of Allah, help us! or: aid us! May Allah grant you mercy.”

Note: none of these allegedly prophetic hadith are free of defects in their chains. 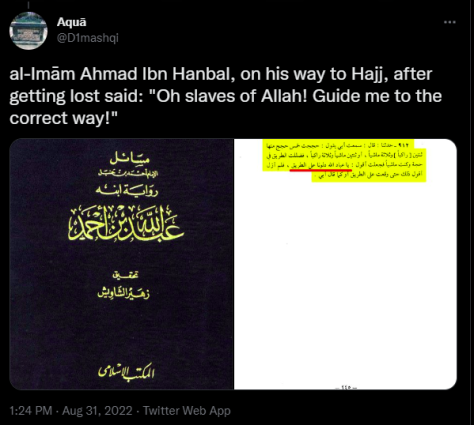 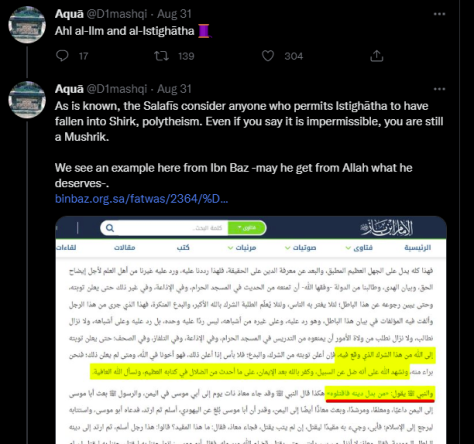 In Masa’il al-Imam Ahmad by his son ‘Abdullah we read the wording of which is as follows:

‘Abdullah the son of Imam Ahmad said: “I heard my father say: ‘I performed Hajj five times, twice riding and three times walking or twice walking and three times riding. I lost my way during one Hajj and I was walking, so I began to call out: O slaves of Allah show me the way! I kept doing that until I found the road.’ or as my father had said.”

“This hadith is inauthentic, and there is no proof in it that it is permissible to seek help from the righteous dead people or the Awliya’ who are dead because the two Ahadeeth are explicit that what is meant by “Slaves of Allah” is a creation other than the humans. The evidence is in his saying in the first Hadeeth: “…for there are many of Allah’s attendants on this earth. They will help you recover it.”; and his saying in the second hadith: “… for indeed Allah has many slaves whom we do not see.” This description applies only to the angels or the jinn, because they are the ones whom we do not usually see. Another Hadeeth explicitly stated that they are a group of angels; which was reported by Al-Bazar and narrated by Ibn Abbas, with the wording:

“Allah Almighty has angels on the earth – other than the record-keepers – who keep a record [even] of the leaves that fall on the ground. Therefore, if one of you is afflicted whilst in a deserted land where no-one is in sight, let him call out: Help O servants of Allah.”

Then Shaykh al-Albani quoted that this Hadeeth was classified as Hasan (sound) by Ibn Hajar and As-Sakhawi, then he commented saying:

“If we presume that this Hadeeth is authentic, it specifies that what is meant in the first Hadeeth by “O Slaves of Allah!; are the angels. Therefore, it is not permissible to include with them the Muslims from among the jinn or humans, whom some people call the men –among the Awliya’ and righteous– who know the Unseen, whether they are alive or dead. Seeking their help and asking them for assistance is a clear Shirk (associating partners with Allah) because they do not hear the du’a’ (supplication), and even if they hear it, they cannot respond to it and achieve what one desires. This is something explicit in many verses, including the Saying of Allah (which means): {And those whom you invoke other than Him do not possess [as much as] the membrane of a date seed. If you invoke them, they do not hear your supplication; and if they heard, they would not respond to you. And on the Day of Resurrection, they will deny your association. And none can inform you like [one] Acquainted [with all matters].} [Quran 35:13-14]

It appears that the hadith of Ibn ‘Abbas which was classified by Ibn Hajar as hasan was considered as sound by Imam Ahmad, because he acted upon it…” [End of quote –from al-Silsilah al-Da’ifah]

However, what is certain is that Imam Ahmad (may Allah have mercy upon him) never practiced the istighathah of the Quburis (who literally pray to other than Allah under the pretext of tawassul, etc.).

Imam Ahmad didn’t invent anything out of the blue; he genuinely thought he was acting on a revelation/hadith.

Angels are not all alike; the angels spoken about in it are very limited-ability *localized* creatures – i.e, ALL it can do is direct you out of the woods, only when you are there WITH them (in the woods) -an ability similar to the limits of what humans can do in their interaction with each other (e.g, giving directions). Only because you ask something from someone that is dead (or is in the unseen/supernatural) does not make things AUTOMATICALLY shirk. Consider two scenarios:

1. Someone says that he met a leprechaun in a jungle, went to his house, asked for a cup of water, and asked it for directions out of the woods.

2. Someone says that there is a beastly and powerful leprechaun that is the master of the woods. It hears everyone’s cries and prayers everywhere simultaneously, is aware of everyone’s situation, and people can invoke it for their relief of calamities through its special station with God and its intercession, people everywhere can find relief. So, people can turn to this leprechaun for help in trouble.

Case 1 and case 2 are NOT the same (even though both involve a leprechaun [a supernatural belief]). Case 1 can be pardoned as not shirk because it does not extend into the scope where it interferes with the supplicatory worship (dua al-ibadah) that is reserved only for Allah (esp. in conjunction with the role of knowing and hearing everyone’s calls and prayers everywhere, people turn to for help from the transcendental which forms the basis of the relationship of worship).

Case 2, however, is CLEARLY major shirk (people invoking the leprechaun in the scope that people invoke Allah, even if it be with the excuse of “intercession” or “not actual doer”).

It’s the SCOPE & the CONTEXT of interference with the right/role of Allah as the only deserving recipient of supplicatory worship (setting up a functioning ‘partner’ with Him in that) that makes things shirk – not just being in the unseen vs. seen, dead vs. alive, without context.

The case of Imam Ahmad asking localized, limited-role very limited-ability creatures one specific human-to-human-like favor is analogous to case 1 above (i.e, it is NOT shirk), neither a bid’ah nor a thing he would have to be pardoned for (it was his genuine ijtihad from a hadith, and he would be rewarded for that, he is mistaken in it).

If he said that people can ask angels for madad (spiritual aid in times of hardship like Quburis), for intercession, for rizq, for relief from calamity anywhere and anytime (like Quburis), THEN he would have left Islam without a shadow of a doubt because that would interfere with the ubiquitous relationship (of worship) that people have with Allah thru seeking help from the transcendental (istigatha/dua) in that scope (everywhere, everyone, anytime) – even if it is said that the angels only intercede (not actual doers). But, that is FAR from what is happening in what Imam Ahmad practiced which is rather closely similar to the limited-role, limited-ability, localized, one-thing, human-to-human-like interaction type of ‘asking’ which Quburis frequently conflate.

Nonetheless, to nip things in the bud, asking anything from the unseen means putting yourself in trouble. Unseen/supernaturality is where people break barriers, concoct super-abilities & into the scope where it interferes with the right of Allah, and fall into shirk. Supplication (du’a) of ibadah (worship) relates to the unseen. In the seen realm, you can see the limits that Allah showed you of what you can ask from fellow creatures. In this day and age of rampant shirk, stick to that [i.e, don’t ask anything from anyone in the unseen] (esp. if u are a layman), lest a Quburi brainwashes you and u end up asking for [insert anything u ask from Allah] as if they (the unseen) are like Allah (everywhere, everyone, anytime) which would be clear major shirk without a shadow of a doubt – sold under such words as ‘istigatha’, ‘tawassul’ or such sugarcoating as “approved from scholars” and u fall for them.

The Salaf knew their stuff, so, that practice could NOT go beyond the scope that it was in, unlike today where Quburis teach people to literally PRAY TO spirits of dead saints and worship them in the name (fallacious comparisons) of certain ijtihad of a scholar. Imam Ahmad would be the first to takfir what the Quburis call ‘istigatha’ and denounce their likening that to what he did of one-thing type of local asking direction from a certain type of limited-ability angelic creature in a forest.

Don’t ask anything from the unseen for your own Akhira’s sake, even if not everything you ask in every context from the unseen necessarily becomes shirk but nobody knows the limits of the unseen, you can’t make things up, it could easily overlap with what you ask from Allah from the unseen. You are not a mujtahid like Imam Ahmad with solid tawhid. You can’t see or know the limits of the unseen, where do you draw the line? People end up crossing the line into the scope where it interferes with Allah’s rights in worship where it becomes things like omnipresence (sugar-coated as ‘hazir-nazir’) type of istigatha which is what Imam Ahmad would takfir a million times over without a shred of a second thought about it.

Here some more thoughts by our brother @Muwahhid124 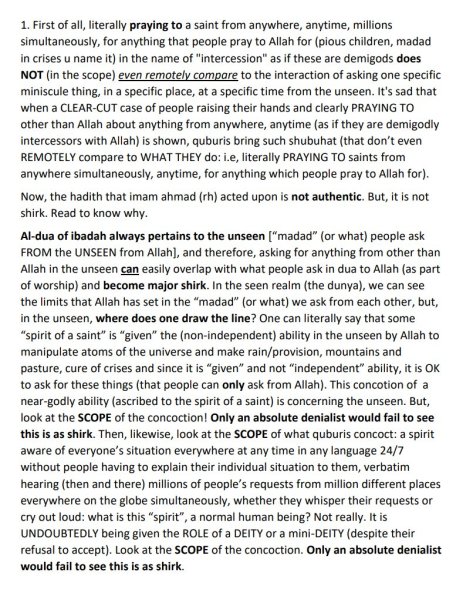 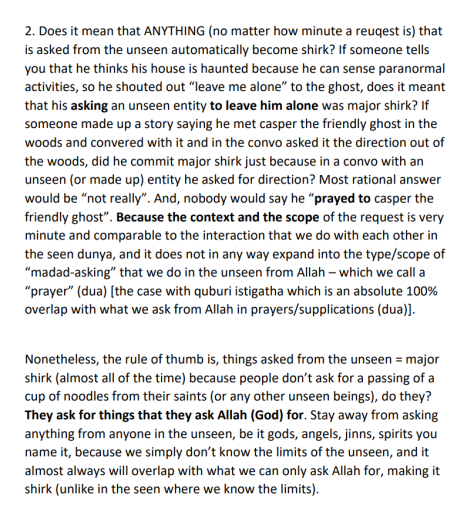 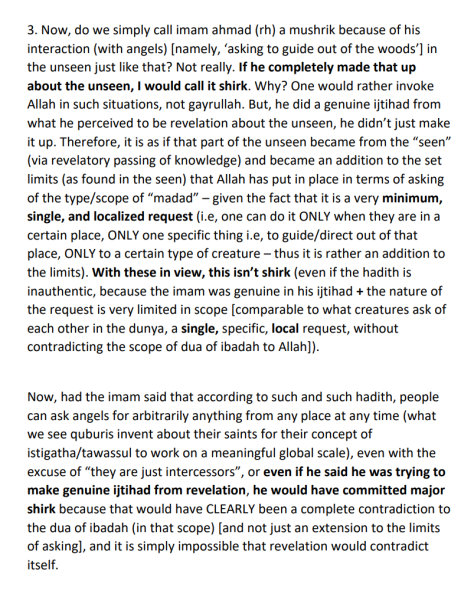