From Rafidi parts in Lebanon, to the heartland of Iran, names like Abdullah, Abdul-Rahim, Abdul-Razzaq etc. are only common in Sunni regions of those respected countries, in Shia regions you can barely find such names, yet there are plenty of: Abdol-Hossein, Abdol-Reza, Abdol-Amir (Ali b. Abi Talib), Abdol-Zahra (Fatimah), Abdol-Rasul, etc. names that the Ahlul-Bayt and their students never approved. 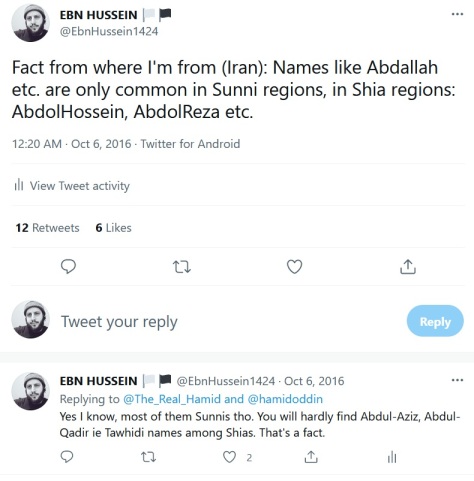 There are so many examples of high profile Shia clerics and their laypeople carrying shirki names, I don’t even know where to start.

On the other hand you will hardly find Abdul-Aziz, Abdul-Qadir i.e Tawhidi names amongst Shias in general, that’s a fact, that’s even common knowledge to the extent that Lebanese, Iraqi and other Arab Shias assume that any person from their country who’s name is Abdullah is most likely a Sunni! What a rotten culture the Rafidi culture is, it is the farthest culture from the culture of the Qur’an and Ahlul-Bayt (a).

Shia customs in Iran aer so deeply polytheistic that even the Islamic goodbye/salam is often replaced with ‘Ya Ali madad (help)’ (يا علي مدد) or ‘Ali posht va panahat’/علی پشت و پناهت (lit. may ‘Ali be your back and shelter, i.e. may Allah protect you and be your refuge).

Another extremely common and polytheistic form of goodbye in Iranian Shia culture is ‘Ali Yaaret’ (‘may Ali be with you’)! 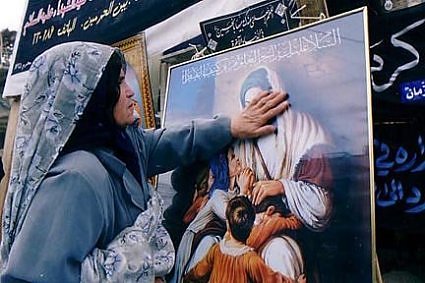 Some Shias (on damage control mode): these are just cultural practices by Iranians Truth: They lie, from Lebanon, Iraq to India they utter such kufr, and it’s not ‘just’ cultural, it is *literally* a religious practice and is rooted in the inherently pagan nature of Imamism.

Kufr breeds Kufr, there is a reason why Sunnis don’t call unto to Ali, Jesus, Umar, Aisha, Fatimah, Abu Bakr, etc. the reason is: Abiding by Tawhid.