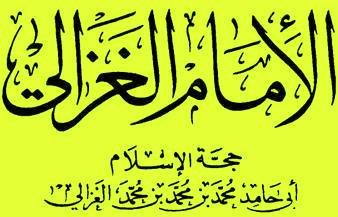 Imam Abu Hamid al-Ghazali (d. 1111 CE) was born in Tabaran, a town in the district of Tus, Khorasan (now part of Iran), not long after Seljuks entered Baghdad and ended the Shia Buyid rule.

There is no doubt that many of al-Ghazali’s (may Allah have mercy upon him) works strengthened the status of Islam against the atheists and Zanadiqah. During his lifetime, the Batini Ismaili Rafidis had emerged in Persian territories and were gaining more and more power, as Nizam al-Mulk was assassinated by the members of Ismaili Rafidi Shiites.

In his Fada’ih al-Batiniyya (The Infamies of the Esotericists) al-Ghazali declared them unbelievers whose blood may be spilled (by the authorities) and wrote several books on criticism of Batinism which significantly weakened their status.

He compiled numerous works and masterpieces, such as Tahafut al-Falasifah (‘incoherence of the Philosophers’) which is an epic refutation of Aristotelian science and the likes of Ibn Sina (Persian Ismaili Rafidi Zindiq).

Was al-Ghazali a deviant?

Imam al-Ghazali is regarded as the Imam of the (later) Asha’ris. However, it is said that al-Ghazali retracted from his ardent Kalami approach and returned back to the way of Ahl al-Sunnah, the way of the Salaf. What is certain is that he wasn’t an ardent Ash’ari as he denounced key premises of Ash’arism and also denounced many practices of the grave venerating Sufis (for which they are known to this very day).

I do not want to get into the discussion about the reliability of such claims (that he repented from all his Sufi-Ash’ari beliefs before his death), what is certainly for sure is that al-Ghazali produced many beneficial gems from which Ash’aris and Atharis have benefitted.

“No fair-minded person would deny the rare level of intelligence, ingenuity and cleverness that Abu Haamid al-Ghazzaali attained. Al-Dhahabi said of him: “Al-Ghazzaali, the imaam and shaykh, the prominent scholar, Hujjat al-Islam, the wonder of his time, Zayn al-Deem Abu Haamid Muhammad ibn Muhammad ibn Muhammad ibn Ahmad al-Toosi al-Shaafa’i al-Ghazzaali, the author of many books and one possessed of utter intelligence. He studied fiqh in his own town, then he moved to Nisapur in the company of a group of students. He stayed with the Imaam al-Haramayn and gained a deep knowledge of fiqh within a short period. He became well-versed in ‘ilm al-kalaam and debate, until he became the best of debaters…” (Siyar A’laam al-Nubala’, part 9, p. 323)

Nasir al-Din al-Albani (Salafi) was asked about this great man:

Questioner: Did Abu Haamid al-Ghazali come back to the methodology of the Salaf, how correct is this statement?

Al-Albaani: No, unfortunately. But he started to take a few very slow steps towards it, and I ask Allaah عز وجل to forgive him and those like him from the people of knowledge.

The tomb-worshipping Batini Sufis (and their brothers in tomb-worshipping, the Rafidah) often cite pro-Tawassul sayings (Bid’i types) of al-Ghazali, while often concealing the following sayings of his from their followers:

“It is not from the Sunnah to touch the wall [of the grave] nor to kiss it, rather, it is more appropriate and more respectful to keep some distance (i.e. from the grave).” (Ihya al-‘Uloom al-Din by Abu Hamid al-Ghazali)

“But al-Ghazali didn’t say it is haram.” Wait for it, he said something more severe than haram.

“Indeed, kissing and touching shrines is from the habits of the Jews and Christians.” (Ihya al-‘Uloom al-Din by Abu Hamid al-Ghazali) 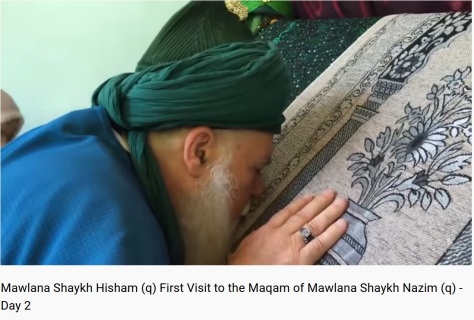 “One must not touch any grave or stone (i.e. stone markers), for indeed, this is from the habits of the Jews and Christians.” (Ihya al-‘Uloom al-Din by Abu Hamid al-Ghazali)

There is no doubt that Abu Hamid al-Ghazali was a beacon of knowledge. I will not attempt to summarise his life or his works, what you have read so far should suffice

The (alleged) grave of al-Ghazali is located near the grave of Sunni Persian poet Ferdowsi and the grave of Nizam al-Mulk (Sunni vizier of the Seljuk Empire in Sunni Persia who veraciously fought against the Mu’tazila and Ismaili Rafidah), in Tus, Khorasan, Iran.

For centuries, the exact location of al-Ghazali’s grave had been a matter of conjecture and debate among Islamic scholars and experts. Several other graves had earlier piqued interests but were later found to be just memorials. For example, one of them is located only a few kilometers from the discovered grave, in the courtyard of a monument named Haruniyeh, believed to have been built by the Abbasid caliph Harun al-Rashid. 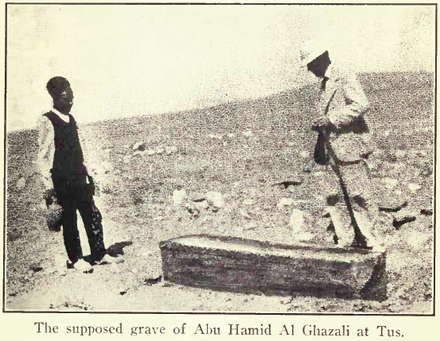 In the 90s, an excavation claims to have revealed what many experts claim are the ruins of al-Ghazali’s grave. In recent years, some Iranian researchers have claimed that they are almost certain of the exact location of al-Ghazali’s resting place in Tus.

The resting place of al-Ghazali probably did not survive the destruction by the invading Mongols, who had passed through these lands in the first half of the 13th century and leveled the entire city (not just raised graves) to the ground. The ruined state of the dome testifies that he was buried in a mausoleum, probably not much different from today’s Sufi-Shia mausoleums and shrines. A heretical practice that opposes the guidance of the Messenger of Allah (ﷺ)

As for Shia rulers: after taking control of Sunni Persia in the 16th century, the anti-Sunni Safavid dynasty did its utmost to erase as much Sunni Persian history as possible. The Safavids particularly targeted the graves of Sunni scholars (as in Baghdad), which they not only leveled but also desecrated.

Grave renovation and the construction of extravagant graves (not to mention shrines) are rare and frowned upon even (as they should be) among Iranian Sunnis. For this reason, one can see graves all over the Sunni areas of Iran that are Islam-compliant, simple, plain, and leveled, without any waste of resources as is the case with the idolaters among the Christians and other extremist grave-worshippers. 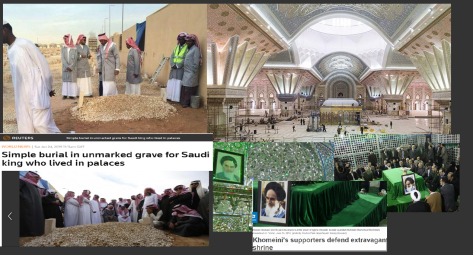 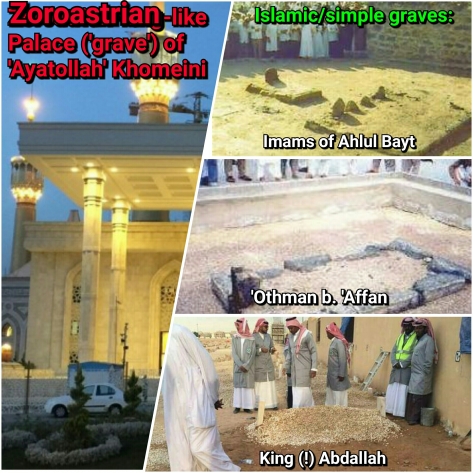 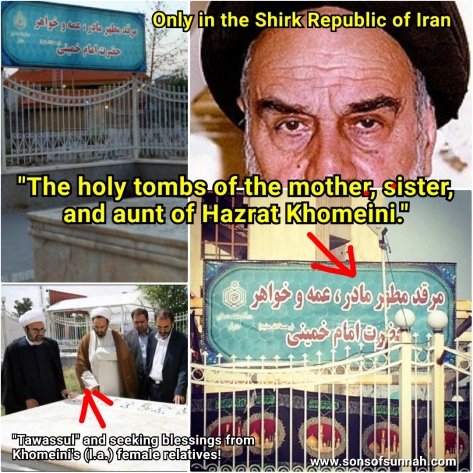 Recent news reports reveal that the Iranian regime is suddenly interested in building a shrine and mausoleum on the (still) humble grave – or what it appears to be – of al-Ghazali.

Grand Ayatollah’ ‘Sayyid’ Muhammad al-Shahroudi (d. 2019) was the representative of Ali Khamenei in the Sunni province of Kurdistan. In an interview, he expressed his joy over tomb tourism that according to him will achieve ‘Sunni-Shia unity’.

Undoubtedly, tomb tourism and the veneration of extravagant tombs and shrines will not only be a good source of income for the ‘Ayatollahs’ but will also serve to justify their own heretical traditions and mislead the ignorant masses. It’s all going to be done in the name of a great Sunni figure after all, who can object? Those who dare to disagree will simply be accused of being ‘Wahhabis’. A tried tactic used by the Iranian regime (and other enemies of Islam).

Other official sources (with ties to the Iranian regime) have even reported how Khamenei himself gave the go-ahead for the construction of a new shrine and grave at al-Ghazali’s supposed resting place.

What could be the reason for the ‘Ayatollahs” interest in building a shrine for a Sunni scholar? Well, the Iranian province of Khorasan has a seizable ethnic Persian Sunni population. The Iranian regime has in the past tried to spread the culture of grave worship among Sunnis by supporting the most heretical types of Sufi groups in Sunni Iranian regions.

In Iran’s Balochistan province, for example, the regime has a history of supporting hypocrites and grave-worshipping extremists who fight Sunnism/Islam in the name of Sunnism. These pseudo-Sunnis are then presented by the regime as splendid specimens of Sunnism. Of course, in reality, these hypocrites are nothing more than stooges of the Iranian regime and the Shia clergy. You will find them all around the world. 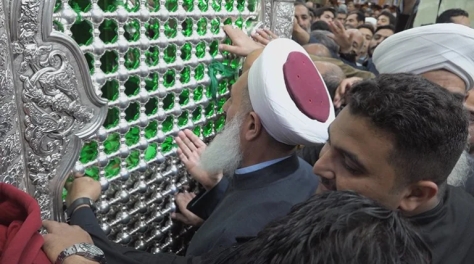 Attempts by the Iranian regime and Shia clergy to poison the minds of Iran’s Sunni masses with the true opiate of the masses, grave worship, have failed miserably. Sunni Iranians do not respond well to Rafidi-like Ghuluw, especially not in the form of Barelvism.

Then there are the grave-venerating Sufis from around the world and certain governments that have raised the flag of grave veneration. Turkey, for example, has spent millions of dollars renovating shrines in Baghdad (Jilani, etc.) and elsewhere, making it clear to the grave-worshipping ‘Ayatollahs’ where its priority lies. 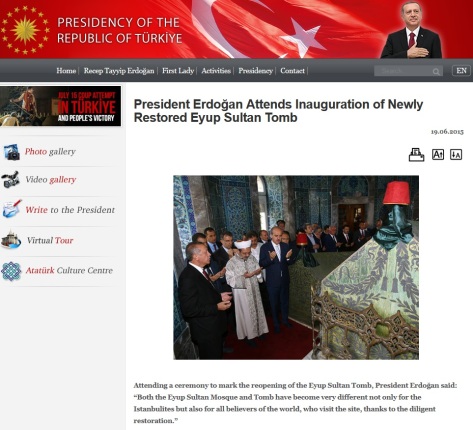 In fact, the Sufi Ottomans were a cause for the preservation of numerous bogus Shia shrines (like the Najaf temple). The Twelver Shia enjoyed much freedom during the Ottoman reign, at one point the cities of Karbala and Najaf were predominantly inhabited by Persian Shias from Iran (‘Sayeds/Syeds’ who flocked from Iran to Iraq. Many of them are known today as ‘Arab’ Shiites).

In recent years, Turkey has increasingly expressed concern over the decaying condition of al-Ghazali’s grave. However, the ‘Ayatollahs’ and the neo-Ottomans seem to have reached an agreement. As reported by Turkish news media, after an official state visit by Turkish Prime Minister Recep Tayyip Erdogan, agreed on the construction of a mausoleum in honour of al-Ghazali.

Over the last few years, Persian online news agencies have reported that tour guides in Iran have stated that Muslims (Sufis) from many countries have already started performing tomb pilgrimage to al-Ghazali (currently) modest resting place.

In recent years, Persian online news outlets have reported that tour guides in Iran have stated that Muslims (Sufis) from many countries (particularly from Turkey and Pakistan and even some from Indonesia!) have already begun conducting pilgrimages to the (still) humble resting place of al-Ghazali.

You only have to go to the tomb-worship-infested Sufi lands to imagine the Ghuluw that the Iranian regime has prepared for those who will visit the shirkistan called Iran.

But isn’t it permissible to visit the graves of the Muslims?

There is no doubt that it is permissible to visit graves in order to reflect on life, and death and to remember the Hereafter. The Prophet (ﷺ) said:

“Visit the graves, for they remind you of the Hereafter.” (Muslim)

In the hadith of Aishah (may Allah be pleased with her) it is mentioned that the Prophet (ﷺ) told her:

This is Islam, these are the etiquettes of grave visitations. In Islam, we are instructed to pray FOR the deceased (not TO the deceased), no matter how great those personalities were (when we send Salawat we pray TO Allah to bless the Prophet ﷺ, we don’t pray TO the Prophet ﷺ).

However, the Prophet ﷺ and his companions never traveled to visit certain graves (the Prophet ﷺ visited his martyred companions in al-Baqi, in Madinah, where he himself lived). And what they certainly didn’t do was build shrines and mausoleums. On the contrary, they continued the prophetic mission and leveled every grave.

Do not leave any raised grave…

There is absolutely no doubt that all these pseudo-Ahlul-Bayt followers and their ilk contradict the Prophet (ﷺ), his noble family and companions, no matter how much they profess that they at least love the Ahlul-Bayt.
They can cite as many statements of later scholars as they like, the truth is as clear as the moon on a cloudless night: all graves must be leveled to the ground, especially those of famous personalities. 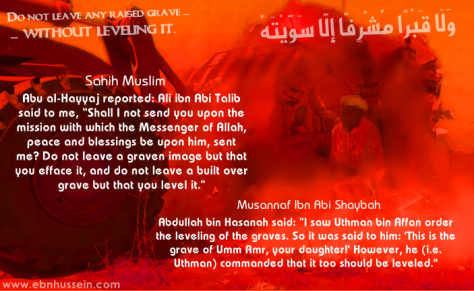