‘Sunni Iran – Religious life in Iran before the Safvid era.’ Title says it all. One thing is for sure, the Masajid called to 5 Adhans a day and the scholars knew Tajwid, unlike the ‘Ayatollahs’ of Qom, Najaf, and Karbala.

The commentary of ‘The Creed of the two Razis’ (Aslus-Sunnah was I’tiqad Al-Din) by our beloved Shaykh Abdul Aziz ibn Marzuq Al-Tarifi.

‘Razi’ is a Nisbah (an adjective indicating the person’s place of origin, tribal affiliation, or ancestry, used at the end of the name). Nisbah is originally an Arabic word that was passed to many other languages such as Turkish, Persian and Urdu.

Razi means ‘from Rayy’ an ancient Persian suburb of modern day GreaterTehran (Tehran was in the past an insignificant small village whereas Rayy was a major Persian city even during Pre-Islamic reign).

There are many great Sunni scholars who are from Rayy (i.e. Razis), all of them of course emerged in majority Sunni Persia (500 years before the Safavid Shia onslaught on most Persian Sunnis in Iran. Many where forcefully converted, killed or fled to Ottoman rules lands such as Anatolia, Iraq, Syria and even greater Khorasan and India), with the two Razis (Abu Hatim Al-Razi and Abu Zur’ah Al-Razi) being the most significant and the ones with the purest Aqidah of Ahlussunnah, they are from among the IMAMS of the Salaf. 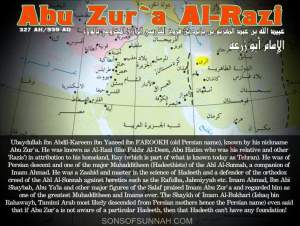 In ‘The Khurasaniyyah‘ both of their creeds is explained, the creed of the saved sect Ahlus-Sunnah wa Al-Athar the creed of the Messenger of Allah () and his Companions (رضي الله عنهم). In it they mention the foundations of the Deen (Usul Al-Din) like Al-Asma` wa Al-Sifat, Qadha and Qadr etc. It is a primary source that proves the Athari creed to be the creed of Ahlul-Sunnah and nothing else.

One of the most famous quotes of Abu Zur`a Al-Razi with regards to the worst zanadiqah:

‘If you see a man belittling anyone from the Companions of the Messenger of Allah (ﷺ) then know that he is a Zindeeq (heretic). That is because we believe that the Messenger (ﷺ) is true, the Qur’an is true and those who conveyed this Qur’an and the Sunnahto us were the Companions of the Messenger of Allah (ﷺ). Rather what the heretics want to do is criticise our trustworthy narrators so they can nullify the Book and the Sunnah, they are more deserving of being criticised since they are the zanadiqa (heretics).’ [al-Khateeb al-Bagdadi, al-Kafayah Fee ‘Ilm ar-Rawayah’, p. 67]

Available in Arabic ONLY. Time to learn Arabic guys, nobody is perfect but you don’t wanna end up like most Rafidah scholars and Du’at and having their laughing stock of a reputation when it comes to Arabic.